No Civilians on the Battlefield!

Speach at the action in Frankfurt/M.

Right now, your hotel is playing host to a casting show for war. Optronic Ltd, a German corporation, is recruiting civilians who are to play a part in the U.S. Army’s military training.

On German territory, U.S. troops are training for war in Afghanistan. During their training, they use their civilian recruitees as live targets, shooting at them with blank cartridges. The victims are to respond in a realistic fashion, to “play dead” after being shot at.

While in Germany, it’s just for training purposes. In Afghanistan, it’s for real. Afghan civilians are being shot at, mutilated, killed all the time – by American and international, including German, soldiers.

The casting show that’s just going on in your hotel is a direct contribution to the ongoing war in Afghanistan.

We appeal to the hotel management to no longer tolerate this casting show on their premises.

We call on the Optronic corporation to stop recruiting civilians for military training.

We protest the degrading use of civilians as bit-players in military training.

Stop supporting the war in Afghanistan!

Frank Bärmann: No Civilians on the Battlefield! Speach, February 28, 2010 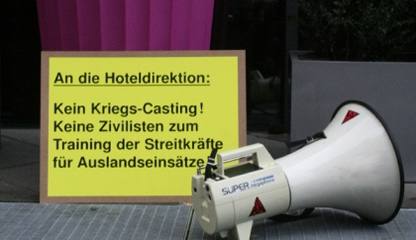