Protest against the outrageous war expenditure in front of the Ministry of National Defence, May 9, 2010

65 years since the end of World War II. The wars and the occupations continue. The war expenditure is too high. 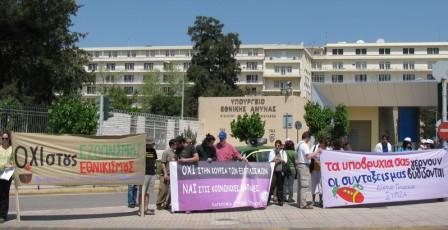 In the 65th anniversary of the end of the Second World War, humanity is not even close to peace, since dozens of wars are taking place across the planet, and arms sales worldwide increased by 21% over the last five years.

While the frugal measures of the government, the International Monetary Fund and the European Union take nightmarish dimensions, condemning millions of people, especially us women, to poverty, unemployment, exclusion and constant stress; at the very same moment of this greatest crisis, small Greece has a grievous record in Europe: it is first in military spending!

Worldwide, Greece occupies the fifth position in the import of weaponry and the 13th in war expenditure as a proportion of GDP, while this year of harsh frugality for the working classes, Greece will pay 10 billion euros for armaments and another 500 million euros for Greek missions abroad, namely the occupations. Along with this, the commissioning and the corruption of the supply of arms and munitions increase the bills and create powerful interest groups for the permanent fiesta of war expenditure to continue.

Greece and her neighbour Turkey are wasting their financial resources on outrageous military spending. Both governments, buying completely useless and unnecessary rockets, airplanes, submarines and tanks, sacrifice on the altar of major arms industries and dealers, in the USA, Germany, France and many others, the access of our people, especially of women, to employment, housing, education, health, joy of life...

Common logic would dictate that now, while Greece is at a critical point, this policy of ultra-expensive armaments should be abandoned in the name of other priorities such as the survival of starving pensioners, the protection of the unemployed or the basic support of the increasingly poor single-parent families at least 90% of which is headed by a woman-parent.

o  To stop the arms race between Greece and Turkey.

o  No participation of Greek forces in missions abroad, such as Afghanistan and Kosovo.

o  Investment in public services (health, education, housing, environmental protection, etc.) that we need, us women and the society as a whole.

o  Creation of structures to support women against violence.

o  Money to combat poverty, which particularly affects women, and not for weapons.

o  No to armaments, no to nationalisms.