(14.05.2013) Nearly 30 demonstrators who gathered across Cağlayan Courthouse to protest for the removal of Article 318 of Turkish Criminal Code which stipulates "alienating the public from military service" as a crime initiated a civil disobedience action with the words "reject military service, because..." 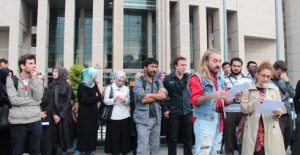 "There shall not be such a crime as alienating the public from the military service. We do not accept such a crime. If stating our feelings and opinions openly on mandatory civil service, a heavy imposition in Turkey, is considered as a crime, then let it be. We are here to commit this crime.

It is stated that the sentences starting with "reject military service, because.." on askeregitmeyin.com till 13 September 2013 will be published as a book and this civil obedience crime will be committed through publication as well.

"Do not go into army, because you may not ever come back"

A couple of sentences starting with "Reject military service, because..." are below:

Ali Fikri Işık: "...a dead society whose conscience is frozen does not need security"

Ayşe Lebriz Berkan: "...you are not victims, you can fulfill your citizenship duty in more humane ways, because wars do not come to an end."

Büşra Erdem: "...TSK is taking advantage of a divine concept "martyrdom" to cover their own murders and abuse their own citizens."

Ceren Cevahir Gündoğan: "...whoever holds the gun commits the crime himself."

Devrim Gündeşli: "...I do not allow you to kill someone on behalf of me."

Ercan Jan Aktaş: "...We are on the side of life not death and murder."

Fatma Turan: "...TSK is a member of NATO which has killed your Muslim brother for the sake of democracy and they want to utilize you for this murder"

Mustafa Sütlaş: "...If you do not serve as a soldier, there won't be any wars."

Mehmet Göksu: "...the state is instrumentalizing Islam through using the concept ‘the home of prophet’"

Demonstration did not take place in front of the Courthouse

Riot police were deployed in front of Çağlayan Courthouse C Gate where the demonstration was supposed to take place. Mehmet Atak, one of the demonstrators, explained the reason why they did not gather in front of the courthouse:

Atak remarked that "the fear factor which prevented public statements in front of the courthouse means waiver of individual rights".

According to the written explanation made by the Press Council, Çolakkadı was informed about the possible problems which may arise out of this ban. Çolakkadı claimed that this ban is not for the press but it is being implemented for the security of visitors and officers working there. All publish statements, independent of any demonstration, can be made in any area except the stairs.