(17.05.2017) Chelsea Manning, the Army intelligence analyst jailed for her 2010 disclosure of classified information, is free. Manning will leave Fort Leavenworth after having been imprisoned for 7 years. She was supposed to serve 35, the longest sentence ever handed down to a whistleblower in the United States, but after an impassioned activist campaign calling for her release President Obama commuted her sentence before leaving office.

“This fantastic news goes a long way to making amends for the brutal treatment Chelsea was illegally subjected to while awaiting trial. It’s tragic that Chelsea had to spend 7 years imprisoned for releasing documents that should never have been classified in the first place, and were clearly in the public interest,” declared Chelsea Manning Support Network co-founder Jeff Paterson. “All of us who worked on Chelsea’s behalf are overjoyed. It feels unreal.”

“I feel fantastic. Getting the news that President Obama had commuted Chelsea’s sentence was overwhelming and filled me with joy” said Nancy Hollander, who was the lead attorney for Manning’s appeal. “I wished I could have immediately hugged Chelsea. She has served a long and difficult sentence and her release is long overdue. It will be great to see her as a free woman.”

What Was in Manning’s Leaks?

In a just world, Chelsea Manning wouldn’t have been jailed and tortured, but celebrated as a hero for alerting the public to the crimes of its government. Atop the list of Manning’s important revelations is the “Collateral Murder” video, one of the most infamous WikiLeaks releases ever. The footage shows a series of US Army air strikes in Baghdad from 2007. These attacks killed 12 people, including a Reuters photojournalist and his driver. The video reveals that soldiers fired upon innocent Iraqis who showed up to help after the first round of civilians had been hit. You can hear two of the soldiers talking on the tape. “Hahaha. I hit ’em,” one exclaims. “Oh yeah, look at those dead bastards,” the other replies.

While the “Collateral Murder” tape was at least reported on by the mainstream media, many other important aspects of the leaks weren’t. Here’s a partial list of what Manning tried to inform us of:

While many Americans are aware of the “Arab Spring,” most probably don’t know that the whole thing may have been kicked off via one of Manning’s leaks. Details of the corruption that enveloped Ben Ali’s government in Tunisia were leaked by Manning. Many believe that these revelations served as the catalyst that led to Tunisians overthrowing the Ali government and, ultimately, sparked the Arab Spring in 2011.

The Torture of Chelsea Manning

After she was arrested, Manning was jailed alone for 23 hours a day over an 11-month period. Juan Mendez, the UN special rapporteur on torture, formally accused the US government of torturing Manning via solitary confinement. Mendez’ final conclusions declared that, “solitary confinement is a harsh measure which may cause serious psychological and physiological adverse effects on individuals regardless of their specific conditions.”

A couple of months after writing this piece, Manning attempted suicide and was disciplined for her actions by being thrown back into solitary confinement for two weeks.

While it’s probably not surprising that many Republicans opposed Manning’s actions and supported her imprisonment, the number of liberals who were fine with it was striking from the very beginning.

Despite the worldwide impact of her leaks, Alyssa Rosenberg, formerly a blogger at the Center for American Progress and now at the Washington Post, dismissed Manning for having “pretty serious emotional problems” and not being “a particularly effective whistleblower.”

MSNBC’s Joy Reid speculated that Manning was simply “seeking anarchy as a salve” for her “own personal, psychological torment.” As for the brutal treatment of Manning in jail, Reid tweeted that “prison (ahem) is meant to be unpleasant” and justified solitary confinement by pointing out Manning was being held for “alleged espionage.”

This kind of liberal reaction remained strong until the very end. After Obama announced that he was commuting Manning’s sentence, a number of Senate Democrats began to distance themselves from the decision. Sen. Mark Warner said it was the “wrong signal.” Sen. Gary Peters said Obama’s choice was “disappointing” and “dead wrong.”

From the very beginning those pushing for Manning’s release fought an uphill battle with no significant support from lawmakers. On the contrary, politicians from both sides of the aisle stood as an impediment to Manning’s freedom. 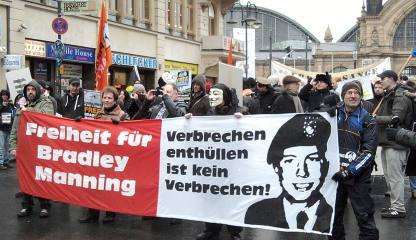