Eritrea: Stop the aid of a dictatorial regime and slavery

Petition to the European Commission

Through this project the European Union provides 20 million € for the project which should be run by the Red Sea Trading Corporation (RSTC), the Government’s central procurement authority. We are very concerned that conscripts of the National Service should be used for this project. In the description it is stated: “The labour used by the construction companies will consist of three types of personnel: permanent Government professionals; those in national service; and those mobilised from the local community on a cash-for-work basis.”

The Special Rapporteur on the situation of human rights in Eritrea of the United Nations described the national service as “slavery” and viewed the nature of military service as “crimes against humanity”. (https://en.connection-ev.org/pdfs/2018_Eritrea_ACountryUnderTheSwayOfADictatorship.pdf, page 14ff). The European parliament has called it “forced labour” and “a form of slavery”. March 28, 2019 the Human Rights Committee of the United Nations wrote in the “Concluding observations on Eritrea in the absence of its initial report”: “The Committee is concerned that the length of the national service, which, initially stipulated by the National Service Proclamation No. 82/1995 for the period of 18 months, has been extended by a mandatory national service programme called the ‘Warsai Yikealo Development Campaign’ for an indefinite period. (...) It is also concerned about allegations that national service conscripts are deployed for labour in various posts, including mining and construction plants owned by private companies, while receiving no or very little salary.” (https://tbinternet.ohchr.org/Treaties/CCPR/Shared%20Documents/ERI/INT_CCPR_COC_ERI_34490_E.pdf)

The note in the project description that „the (Eritrean) Government has indicated that reforms to the National Service will start to take place when jobs have been created, so allowing incremental demobilisation“, can’t be accepted as a justification for the use of conscripts as part of this project. In fact, despite repeated hints to implement changes, the Eritrean government has taken no action to demobilize soldiers, some of whom have been in service for over 10 years. In Eritrea, military service, still referred to as national service, is an unlimited service. Men and women are usually not dismissed from the military, but used in government or military owned companies. They are still under military control und receive a very little pay. In the military, superiors have absolute authority, which they exercise with arbitrariness and torture. Women are often exposed to sexual assault, including rape. (www.fluechtlingshilfe.ch/assets/herkunftslaender/afrika/eritrea/170630-eri-nationaldienst.pdf) The Global Slavery Index indicates for 2018 that 451,000 persons in Eritrea are subject of these conditions, nearly 10% of the population. (https://www.globalslaveryindex.org/2018/findings/regional-analysis/africa/)

In response to a parliamentary enquiry the Federal Government of Germany stated April 25, 2019: „In general, the Federal Government conveys the clear expectation that German companies in their economic activities abroad comply with the standards of good corporate governance, as described in the OECD Guidelines for Multinational Enterprises as well as in the National Action Plan Implementation of the UN Guiding Principles on Business and Human Rights. This includes, in particular, the prohibition of forced labour, as laid down in the International Labour Organisation Convention No 29 from 1930 about forced or compulsory labour and the additional Protocol of 2014.” (http://dip21.bundestag.de/dip21/btd/19/098/1909806.pdf) The very fact the European Commission is deviating from this standard is completely incomprehensible to us.

On the occasion of the International Day of Conscientious Objection, which since 1985 has been highlighting the fate of men and women who in various countries are subjects to repression, detention and torture owing to their conscientious objection, this year we are focussing on the situation in Eritrea.

We therefore call on the European Commission to stop the project T05-EUTF-HOA-ER-66 immediately. The aid subsidizes a dictatorial regime, as the EU funds go directly to the Government’s central procurement authority. Conscripts are meant to be used whose employment can only be described as slavery. There are no assurances on behalf of the Eritrean government to comply with human rights.

We call on the European Commission to stop collaborating with the Eritrean regime under the circumstances. Eritrea is a state without the rule
of law and without respect of human rights. The 1997 constitution is not in force. There is a lack of independence of judiciary, no parliament, no elections. All of this was stated in the above mentioned Concluding Observations of the Human Rights Committee of the United Nations in March 2019. So far, the Eritrean regime under Isayas Afeworki has made no commitments to improve to comply with human rights standards nor to implement constitutional standards to guarantee democracy.

We call on the European Commission to ensure that Eritrean refugees have unrestricted access to asylum procedures in order to claim the necessary refugee protection. This also includes ending the walls-up policy against refugees, which is causing thousands of deaths in the Mediterranean sea.

We call on the European Commission to make an unequivocal statement to the Eritrean government to respect the human rights. This includes the release of conscientious objectors and political prisoners. This includes effective and sustainable measures to guarantee democracy and human rights.

We also call on the European Commission to support organizations and initiatives of the European diaspora who in various ways are working to promote human rights and democracy and their implementation in Eritrea. This would also send a clear political signal to the Eritrean government.

(07.12.2020) Eritrean organizations call for an international day of action: Stop the War in the Horn of Africa!  - Protest against war and forced recruitment, December 10
...more

(17.11.2020) Eritrean Research Institute for Policy and Strategy (ERIPS): Urgent Appeal to Stop War in the Horn of Africa
...more 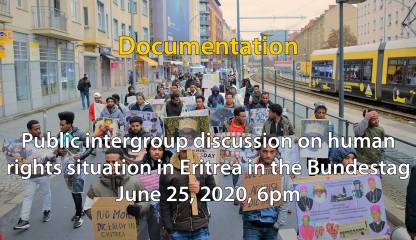