EWRI: Stop the Support of the Dictatorial Ethiopian Regime!

(19.11.2009) With a rally in front of the Ethiopian consulate about 50 demonstrators protested in Frankfurt today. Members of the Ethiopian War Resisters’ Initiative (EWRI) had invited to this rally considering the beginning campaign for the election in May 2010.

“We want free and peaceful election next year”, EWRI announced. But “again the regime is trying to engineer the May 2010 election by creating problems with the opposition. The new government declaration on NGO activities in Ethiopia is repressive and meant to hinder the activities of NGOs inside and outside of Ethiopia. With this law, any opposition and resistance could be criminalised easily”. “We want to prevent a repetition of waht happened in 2005”, Samson Mulugeta Tefari und Selamawit Kahsay from EWRI pointed out. At that time “the dictatorship under Meles Zenawi manipulated the election and detained opposition leaders and their supporters, civil society leaders and journalists. Hundreds of thousands were arrested arbitrarily, mistreated and tortured. Members of the opposition continue to be imprisoned.”

Furthermore EWRI protested with the rally against the war policy of the Ethiopian government. Most recently, the Ethiopian military was engaged in fights in the capital city of Somalia, Mogadishu, in August 2009. “We fear the worst”, so EWRI, “considering the reports of Human Rights Watch about the previous intervention of Ethiopian troops”, which officially ended after two years in January 2009. 2007 Human Rights Watch had reported that the Ethiopian military “violated the laws of war by widely and indiscriminately bombarding highly populated areas of Mogadishu with rockets, mortars and artillery. On several occasions, the troops specifically targeted hospitals and looted them of desperately needed medical equipment.“

“We believe”, EWRI stressed, “that all forms of war and military oppression are a hindrance to justice, freedom, democracy, rule by law, human rights, and sustainable peaceful development in our country and the whole region. The Ethiopian War Resisters’ Initiative (EWRI) is dedicated to a long-lasting peace on the basis of human rights and the rights to refuse war, militarisation, forced recruitment and to oppose all forms of human rights violations.” With this position EWRI is part of a regional resistance movement together with other initiatives. Therefore refugees from Eritrea and Uganda joined the rally and expressed their solidarity with the activities of EWRI. 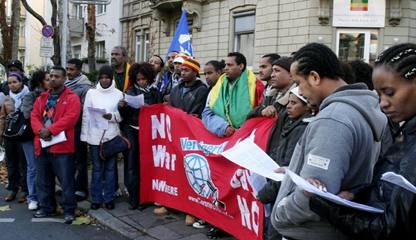 (10.11.2009) Ethiopian War Resisters’ Initiative (EWRI): For Peace and Democracy in Ethiopia - EWRI call to a Rally and Manifestation in Frankfurt/M.
...more