"We will no longer fight your wars!"

(11.11.2011) Today, the 11/11/11 is many Holidays. In addition to it being St. Martin´s Day, and the beginning of Fasching, in the United States today it is a national holiday as well. Its called Veterans Day, it takes place on the anniversary of the end of the First World War, and the supposed idea is to honor those men and women who have fought on behalf of the US government. 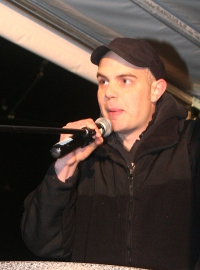 My name is Chris, and I am an Iraq war, Veteran. I served in Baghdad in 2005-2006. I am joined today by Dave, a Vietnam veteran, and others who are here to support us as we participate in another occupation. This war will not be fought with guns and bombs, but with our ideas and our will to transform and reshape the world. This war is the war of the 99%, the vast majority of the population, standing up against 1%, the self styled elites whose control over the government and private sectors have brought them unimaginable wealth at the expense of normal people. We are here to stand in solidarity with you, the people, who have been oppressed and exploited by the corporate and political elites of the world, the bankers and the political powers that are at their beck and call.

Let me read from a letter written by a comrade of ours, Ross Caputi, who served in the U.S. Marine Corps in Iraq: “I did not serve my country in Iraq; I served the 1%. It was on their behalf that I helped lay siege to Fallujah, helped kill thousands of civilians, helped displace hundreds of thousands of innocent people, and helped destroy an entire city. My ‘service’ served Exxon-Mobil, Halliburton, KBR, Blackwater, and other multinational corporations in Iraq... I was an occupier, and now I am an #occupier.”

Today the Occupy movement in the United States is being fed by the presence of veterans, from Iraq and Afghanistan, the Persian Gulf, and Vietnam:

- Those who are known as “Veterans of the 99%” and who marched from Vietnam Veterans Plaza to the New York Stock Exchange on November 2.

- Those who stood in solidarity with Iraq veteran L.Cpl. Scott Olsen who was shot and nearly killed by the police at Occupy Oakland in California.

- Those Veterans for Peace who were the first to be beaten and arrested at Occupy Boston by the police of that city.

Veterans are standing in the front ranks of the Occupy movement because we know and feel first hand the effects of the world economic disaster that has descended on the 99%. We have witnessed the privatization of the wars in Iraq and Afghanistan. Many have returned home to find that the banks had foreclosed on our homes. We returned home to higher unemployment rates than the general population, finding our jobs out-sourced to low wage third world nations we fought to “liberate”. We returned home to find that the government had bailed out the financial institutions with hundreds of billions of dollars, but cut benefits to veterans and conspired to deny us what is needed to help recover from the wars that were fought on their behalf. A recent report in USA Today news cited figures from the government that in 2010 over 13,000 veterans between the ages of 18 and 30 were homeless. In such ways the 1% says, “Thanks for your service”:

- To those who have bled and watched their comrades die.

- To those who have committed atrocities for their profit.

- To those who will carry the physical and psychological scars of pointless wars for the rest of their lives. 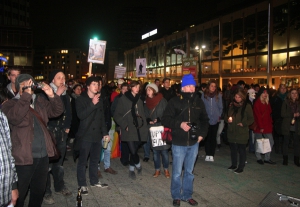 We say to the 1%: “We will no longer fight your wars! Instead, we stand in protest to the violence and injustice you have wrought upon the earth! Companies like Haliburton, KBR, General Dynamics, Fluor Daniels, Blackwater, Armour Group, Dyncorps, have made billions of dollars off of human tragedy, to pave the way for the likes of Exxon-Mobil, and Shell to take control of Iraq’s oil fields. And now there is no money to build a future? We demand: Money for jobs and education, not for wars and occupation. We demand an end to the influence of the US´s military industrial complex and financial sector on Politicians who have been elected to serve the entire population, not just their lobbyists and campaign donors. We demand an end to the revolving door between government office, and corporate leadership. And we demand an end to our “elites” interest´s being put before the interests of the general population. We are not second class citizens, in the US veterans are treated (whether justified or not) with lip service as heroes, yet it is very clear who really gets first class treatment in the US: the 1%.